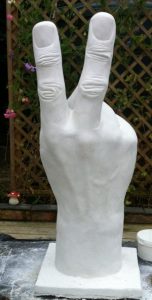 A client of eccentric tastes contacted me in 2012 to produce a giant hand as ornament to his garden in sunny Dorset.

He had been struck by something rather similar seen in Spain and wanted a piece for a sunbathing terrace and hot tub area. After much to and fro we fixed the design and he declared the title “Spirit of Agincourt” after the mythic origins of the gesture. Turn it around and it is a classic peace gesture of the 1960’s – much more friendly!

The piece ended up weighing nearly 30kilos and i am indebted to fellow sculptor Jas Davidson in his help creating the mould for the piece.

One final madness – the client came to pick up the piece and had promised to bring either a truck or at very least a large estate car.

He turned up in a bright red coupé – but somehow we managed to squeeze it in and it arrived safely at its new home! 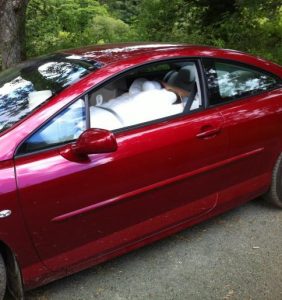 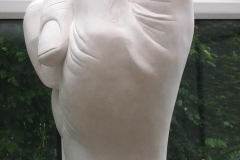