Oswestry has a treasure on its doorstep. One of the finest Iron Age Hillforts in the whole UK and likely Europe.

Sadly such eminence is not cherished by developers and planners. A plan was created that would ring this monument with an urban sprawl.

Immediately a grass roots protest to save the hillfort was begun with celebrities and eminent archaeologists joining the fray. Amongst it all, local artists responded to the call and held an exhibition that was first shown in Oswestry and later in Aberystwyth.

Gwynhafawr and the Barbarians was my contribution. Old Oswestry Hillfort is reputed to be the birthplace of Gwynhafawr or Guinevere – wife of King Arthur. Rather than depicting her as some wan, pale pre-raphaelite beauty, i chose to show her enraged at this act of vandalism, bursting through the grey bricks of unthinking urbanisation.

The protests have met with some success but vigilance is required since they haven’t given up on the plan yet!

Information on the campaign

Council for the Preservation of Rural England (Shropshire)

On display in Willow Gallery 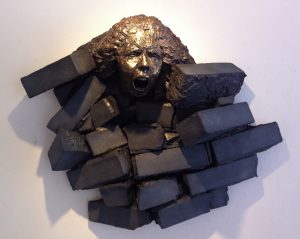 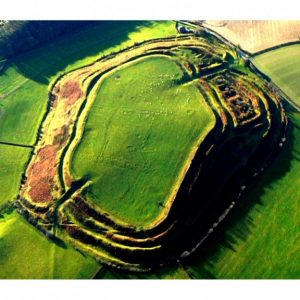